This video was shot five years ago (I was 34) when Beth Fisher still worked as an anchor for Channel 3 in Las Vegas. She used to do a series every spring about Melanoma skin cancer to promote awareness about this deadly disease and to encourage people here in the desert to use sun protection. Of course, I was diagnosed right around this time and my mom called for her to interview me. In spite of my complete fear of video cameras, I agreed to do it in an effort to raise awareness about what happened to me. 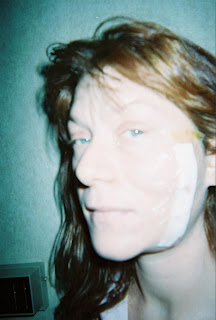 According to The Melanoma Center:

"Melanoma is currently the sixth most common cancer in American men and the seventh most common in American women. The median age at diagnosis is between 45 and 55, although 25% of cases occur in individuals before age 40. It is the second most common cancer in women between the ages of 20 and 35, and the leading cause of cancer death in women ages 25 to 30...The United States has experienced a dramatic increase in the number of melanoma cases over the past few decades. According to the American Cancer Society, the incidence rate for melanoma (number of new cases of melanoma per 100,000 people each year) has more than doubled since 1973. The mortality rate for melanoma (number of deaths per 100,000 people each year) has increased at a much slower pace and has remained stable over the past 10 years. During this same time period, there has been a significant rise in overall five-year survival in patients with melanoma. This may be due to thinner depth of tumors at time of diagnosis and improved surgical techniques to treat the disease."

I firmly believe this dramatic increase in the number of people affected by melanoma is directly related to when tanning beds where introduced to America by Friedrich Wolff in 1978. From the age of 22-31 I was obsessed with getting and staying as tan as possible during the months of May through September. I spent the first part of every summer tanning on a daily basis because it was an easy short-cut to the color I needed to wear the Daisy Duke's I'm usually rockin' when it's hot.

Like most people, I thought I was doing something that was healthy for me, just because I looked so good. I worked in a tanning salon with no training and passed on my ignorant belief that tanning was healthy for our bodies. Somehow, I was able to ignore the burned smell that always radiated from my body after a typical 30 minute session, little did I know, I was slowly killing myself.

I have no idea when the spot showed up on my left cheek. It was a black dot that continued to grow over the years. I was blind to it, until my Mom saw it. She kept on my case until I finally agreed to get it checked out. Thank Gawd, I went to a dermatologist to shut her up! The doctor biopsied the mark immediately and called me with the news: I had malignant melanoma, stage III, Clark Level IV. Serious. Very serious.

As a cancer survivor, I feel it is important to share my story with you. I hope anyone who watches my video will think twice before using the tanning bed again. I know it makes you look good at the time, but I have a four inch scar down the middle of my left cheek, and I am lucky to be alive after three surgeries and six months out of work. It's no joke. I have to have my skin checked every six months and a Pet Scan of my body every year for the rest of my life. Ever had a PET scan? Think internal x-ray. NO FUN. Vanity is not worth the price I paid, nor the one I could have paid for my ignorance.

In spite of how silly I think I look, I am putting this video out there for you guys. If you have any questions, please feel free to contact me through the coming soon page, or hit me with a comment.

Believe me, I still get my tan on, but I do it the natural way: in the sun with SPF 30. Oh, one other thing, I used to think I would not get a tan with the higher SPF, that's a load of crap. I get just as dark with what I use now, as I did when I was frying my ass with SPF 4. Just sayin.'