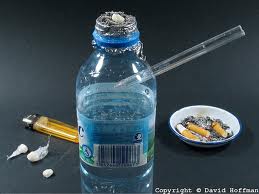 So I show up at my friend's house; a guy I met at work.  He is an attractive mixed kid, about the same age as me.  We are meeting his friend, who will supply the drugs and a place to party.

When I enter the kitchen, I am expecting to see lines laid out on a mirror, or something.  At fifteen, I had just begun to experiment with cocaine.  Snorting it was the only way I had done it so far.  I was surprised when we found the owner of the place standing over a stove with a spoon in his hand.  The air smelled kinda weird, like plastic, or something.

My friend said, "hey man, can I hit that?"  And the guy passed him a soda bottle with aluminum foil on top of it.  The foil was held down with a rubber band.  I watched as my friend lit the top of the bottle for longer than seemed necessary.  He put his mouth over a straw that was attached to the bottle where he inhaled a bunch of smoke, held it for a moment, then he blew it out.  His face changed immediately.

He didn't really seem like he wanted to talk anymore.  And our host offered me a "hit."  Without any fear at all, I took the pipe from him and did what I saw my friend do.  All the while the man was coaching me on how not to burn the rock too fast.

For a moment, everything went kind of black as I held the smoke.  When I finally exhaled, I could feel this overwhelming joy.  It is hard to explain.  My heart was beating out of my chest and my head started sweating a little bit.  I swallowed hard, and tried to talk...but I just did not want to.  I stayed silent to experience the full effect of this new high.

We spent the next two days smoking cocaine.  I don't remember a lot of details, except that I was messed up the whole time and I did not want it to end.  So much so, that when we were out of money I offered up and tried to trade my mom's jewelry for coke in New Bedford.  We went directly to the dealer's house.

Fortunately, he wouldn't give me enough drugs to make the ultimate betrayal and evidence of my already out of control habit a reality,  yet.